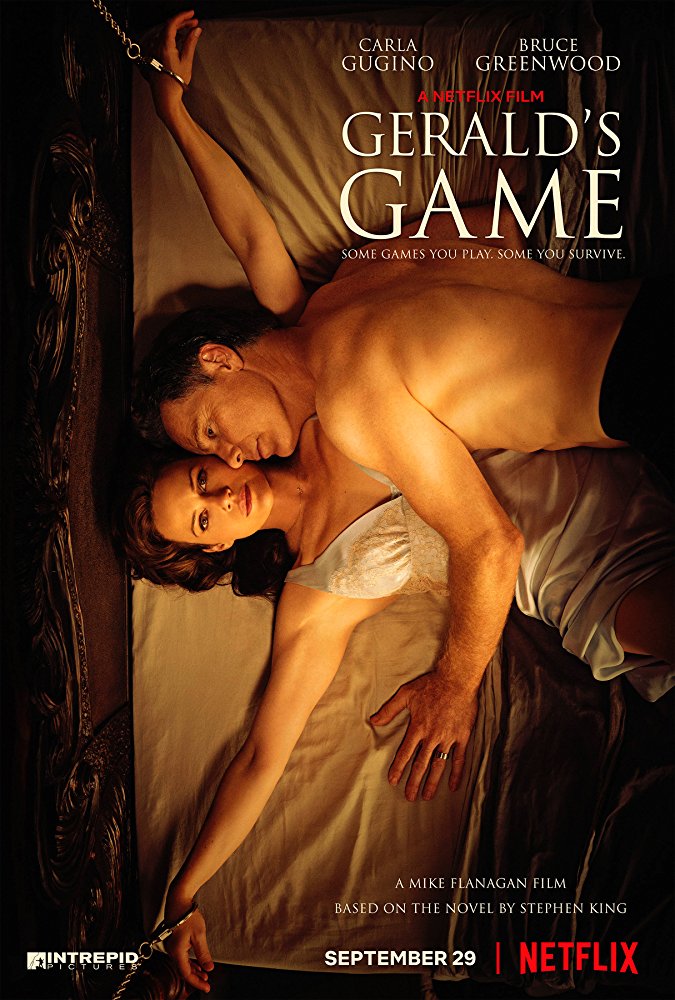 Every child’s story is how they bury their parents. Whether with a spade full of dirt or years on the psychologist’s couch, growing up means the acknowledgement of who we were with our parents and who we are now. Jessie (Carla Gugino), the heroine of Mike Flanagan’s adaptation of the Stephen King novel Gerald’s Game is a woman literally bound to her past.

Jessie and her husband Gerald go on a vacation to reinvigorate their relationship. Interestingly enough, Gerald’s idea of reconnecting is by handcuffing Jessie to the bed. The act gives us a visible indicator of what intimacy is for Gerald and what it signifies for Jessie. Emotional connection for Jessie, such as it is, comes with being incapacitated physically. For Jessie, affection is blunted with passiveness and physical domination. Gerald’s view is exceedingly masculine in that physical intimacy is something that batters and subdues. The act is reminiscent of the cultural/sexual phenomenon of men sending pictures of their penises to women via social media. The act, like Geralds sex play, is a demonstration that for men, connecting physically means being objectified, even if that objectification is happening to their own bodies.  When Gerald has a heart attack, Jessie is left handcuffed to the bed without a way to escape. The word game in the title refers to sex play, but also to the psyche’s means of protecting us from scarring events. There is a forgetting that is not forgotten, a trick of memory that holds trauma so close that Jessie doesn’t sense it though it colors her vision like smoked glass. Stranded in the middle of Gerald’s submissive game, Jessie is chained to the memory of how she came to accept domination as love.

The movie is crosshatched with dialogue placed in Jessie’s alter ego, an affirmative survivor and in Gerald, the dark edge of her psyche that alludes to her powerlessness. Along with this Jessie dreams of her molestation at the hands of her father during a summer in which a total eclipse occurred. While Jessie’s siblings and mother go out for the day on the boat, she stays at the lakeside cabin with her father. The parallels are obvious with the current moment in which Jessie is stranded at the vacation home.

Particularly effective are the moments when Jessie is trying to figure a way out of her situation. These scenes offer Jessie as a layered character with multiple voices both giving her confidence and dismissing her, playing at the psyche’s game of both driving us towards death and saving us from the same. Most frightening is not the wild dog devouring Gerald’s body or even the Moonlight Man, a spectral creature that arrives at night, ready to usher Jessie towards death. The terror comes in her father’s appearance after molesting her. For Stephen King, the face of terror is often exotic, clowns, vampires, cars, but here the most assiduous horror is the abusive father making a victim of his daughter. The manipulative way Jessie’s father (Henry Thomas) places thoughts in her head, first agreeing they should tell her mother and then pretending his real fear is that Jessie might be blamed for the incident and thus tear apart the family, are true chilling moments that no demon or vampire can ever match. The viewer sees the defining moments when the cuffs were truly put on Jessie.

The greatest part of a trick is maybe the setup and the payoff, if the turn is clever enough, only matters inasmuch as it allows us to hold to the original premise fully. While Jessie’s escape and her encounter with the Moonlight Man fall flat towards the end of the movie, the power of her struggle and the freedom and lightness the viewer feels at the end makes up for a few missteps. Jessie’s struggle is more powerful because whether we’ve experienced the kind of abuse she has or not, there are always chains that bind us, always anchors of the past that hold us to places we’d rather be free of. The film shows us a person confronted with brutality dressed as love and how the immobilizing effects of this can be upended. Gerald’s Game is a horror movie of true darkness and true light, something that uplifts us as well as scowls at the ugliness of our inner monsters. Maybe the point of the title and the movie is that life is just that, a game, one that can only be won or lost by us.