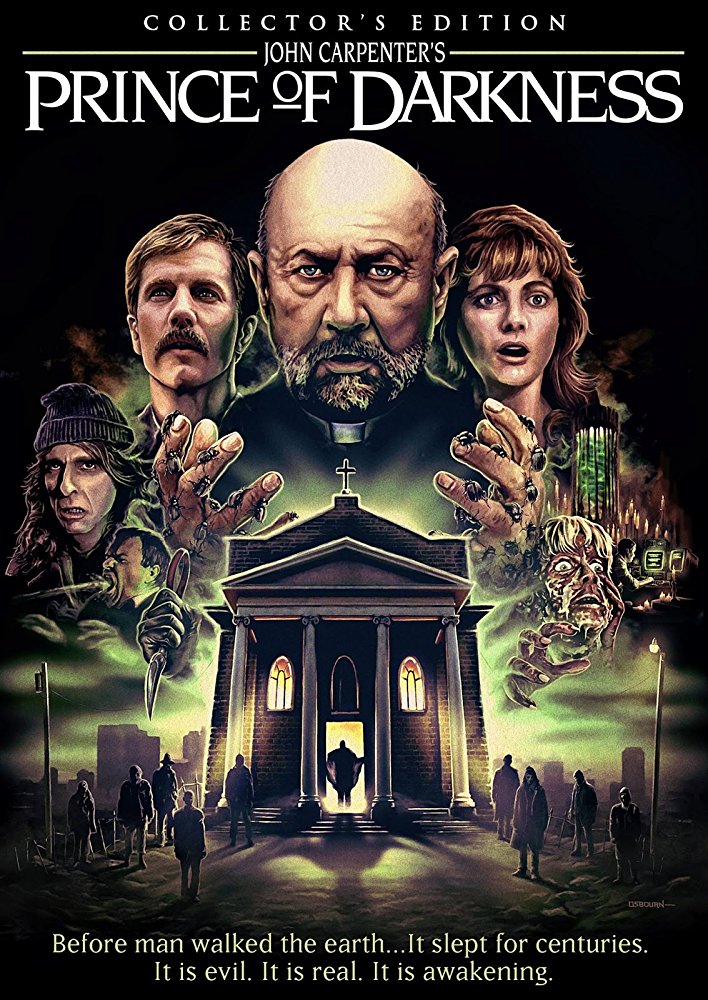 Commenting on which movie of his fans love, George Romero said something to the effect that some fans tell him Night of the Living Dead is their favorite movie and some say Dawn of the Dead, but the real sickos are the ones that love Day of the Dead. In a sense that is my feelings for John Carpenter’s movie Prince of Darkness. While the film is perhaps his worst looking movie in terms of effects, sets, and props, outside of The Thing, it is perhaps the most provocative movie in Carpenter’s ouvre. The movie is about dangerous knowledge,  the ability for humans to ignore elemental evil by the worship of science. However there is a much more devious discussion going on. The narrative centers around the priest (Donald Pleasence) uncovering a secret sect of Catholic priest’s hidden away in blighted church in the inner-city and the relic they’ve protected for millennium. Enlisting a group of graduate students from various disciplines that are both philosophical and scientific, the students headed by Professor Howard Birack (Victor Wong) descend on the inner city church to study the relic, a large cylinder of circulating greenish liquid.  However, the setup in this case is much less than the actual philosophical weight of the subject. Carpenter foregrounds what is about to happen in larger philosophical matters  mainly what humans consider reality. Professor Birack says:

Let’s talk about our beliefs, and what we can learn about them. We believe nature is solid, and time a constant. Matter has substance and time a direction. There is truth in flesh and the solid ground. The wind may be invisible, but it’s real. Smoke, fire, water, light – they’re different! Not as to stone or steel, but they’re tangible. And we assume time is narrow because it is as a clock – one second is one second for everyone! Cause precedes effect – fruit rots, water flows downstream. We’re born, we age, we die. The reverse NEVER happens… None of this is true! Say goodbye to classical reality, because our logic collapses on the subatomic level… into ghosts and shadows.

For Carpenter the devil is indeed in the details and it is humans allegiance to pure science and logic that allows for this “anti-particle” known as satan to exist. Again, Professor Birack foregrounds a kind of elemental evil that jumps beyond biblical explanation moving through any kind of classification of knowledge . Birack says:

Suppose what your faith has said is essentially correct. Suppose there is a universal mind controlling everything, a god willing the behavior of every subatomic particle. Well, every particle has an antiparticle, its mirror image, its negative side. Maybe this universal mind resides in the mirror image instead of in our universe as we wanted to believe. Maybe he’s anti-god, bringing darkness instead of light

Carpenter  gives us a horror film about satan that works both sides of the street. For those of us with faith he tells us everything we believe is true and satan is not only a living being, but that he’s being kept from us by a protective, secretive church. For those who are not believers, the directors tells us that there is a precedent for what could be conceived as satan, an element that is natural and logical. The cold calculation of a universe mechanized if not by God than the natural events of creation. However, taking any movie as simply about its topic is a folly. Rosemary’s Baby is not about satan really, it is about patriarchy and the ends and means a society has for controlling a woman’s body.  Similarly, Carpenter’s film is not so much about satan as about dangerous knowledge. During this eighties the idea of interdisciplinary knowledge was seen as a threat to the pillars of ‘traditional’ American society.

In her introduction to a new edition of her seminal work Revolution and the Word: The Rise of the Novel in America, Cathy N. Davidson describes the atmosphere of the eighties when her book was published and the political undercurrent affecting such studies. Davidson writes, “Books such as Allan Bloom’s The Closing of the American Mind (1987) and E.D. Hirsh’s Cultural Literacy (1987) fanned the flames of the Culture Wars (and climbed best-seller lists) by insisting that American culture was going to the dogs. The ‘dogs’ were defined widely and variously, as proponents and purveyors of mass culture as well as (incongruity) feminists, people of color, Marxists, Vietnam War protesters, and other radicals who were thought to be controlling the academy, changing the syllabi and required courses, replacing core courses in Western civilization with ‘politically correct’ requirements for diversity’ and ‘Third World’ culture” (1398). While Davidson describes this political undercurrent in terms of the publication of her book, her point is that within the mid-eighties, when both Carpenter’s film and Davidson’s book were released, there was a fear by conservative critics about exactly how interdisciplinarity would affect the academy and society as a whole. This fear resides in the notion the counterculture of the sixties had infected the American academy leaving the institution in the control of radicals who would change the intellectual and cultural import of american society. No longer did the traditional disciplines cohere, but critical theories like New Historicism and Deconstructionist, Queer Theory and others shrugged off the concept of universality and explored how disciplines previously thought to be insular interacted in knowledge formation.

Carpenter’s film faces this fear head-on giving us a knowledge that is unleashed because the old ways are ignored, science and religion dovetail in a way that becomes dangerous because of what they uncover. Institutions like the church, charged with working as intermediaries for common people now look to science and because of this the dangerous knowledge of satan has been unleashed. Ironically, the more explanations that are provided about satan the less the group of graduate students and priest understand. Running tests on the relic the only thing they uncover is more mysteries. Knowledge does not lead to explanation or even a clear concept of what exactly the metaphysical repercussion are of satan, the antiparticle, or what it means to the story other than obvious destruction.

Along with these questions is a troubling dream that the ostensible main character Brian Marsh (Jameson Parker) is haunted by throughout the movie. The dream is of a camera circling around the sidewalk to the entrance of the church the students are trapped inside. A strange voice says:

This is not a dream… not a dream. We are using your brain’s electrical system as a receiver. We are unable to transmit through conscious neural interference. You are receiving this broadcast as a dream. We are transmitting from the year one, nine, nine, nine. You are receiving this broadcast in order to alter the events you are seeing. Our technology has not developed a transmitter strong enough to reach your conscious state of awareness, but this is not a dream. You are seeing what is actually occurring for the purpose of causality violation.

Troubling as the dream is, the implication of what these things mean is all the more perplexing. The viewer sees a huge shrouded figure at the entrance of the church, his arms stretching outward. This is the future to come, the possible repercussion for our main character’s failing to stop satan. Yet the idea that satan has become embodied in the future does not appear to dim the scientific knowhow of those sending the message through the dream. The voice says these dreams are used because a way has been developed in order to directly contact Brian consciously, yet the suggestion is that research is being done, that knowledge as we know it hasn’t come to end because of satan, but on the contrary is the one ballast that could possibly save the human race and bring balance to everything.

Carpenter literalizes the Reagan era social conservatives fear of interdisciplinary knowledge and yet with all the chaos, the only order that can be established is by understanding what happened in the past and using that same knowledge to save humanity. At the end of the movie, after Lisa Blount (Catherine Danforth) has pushed satan back into the mirror world he was emerging from, following him back into that world, Brian has the same dream. The same voice gives the cryptic warning, the camera pans around the sidewalk, following it up to the entrance of the church where we see a figure that is not satan, but Lisa. Brian comes awake shocked at what he’s seen and yet walks to the mirror in his room, reaching to touch the reflective surface. The camera focuses on Brian’s hand going to the mirror. The viewer wonders whether Brian’s hand will go through the glass into the other world, yet Carpenter does not answer the question that many horror movies would use for a cheap scare. We see Brian reaching, but never truly get an answer as to what happens. Carpenter does not give us a clear answer because he knows there isn’t one. Whether we believe in science or religion the answer of what true knowledge is will never be definitive. As Dr. Birack says“Cause precedes effect – fruit rots, water flows downstream. We’re born, we age, we die. The reverse NEVER happens… None of this is true! Say goodbye to classical reality, because our logic collapses on the subatomic level… into ghosts and shadows.” Carpenter gives us a world where knowledge is all we have, but it is never certain. Logic collapses and so does our arrangement of knowledge. We are left only with what we believe, ghost and shadows. Do we touch only our own reflection or is there something behind it, a world beyond the prism of glass, beyond any kind of explanation. Carpenter leaves it up to us.